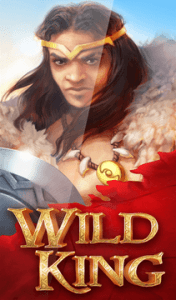 In a faraway land, where the winters are long and the sun seldom shines across the windy mountain plateau, lives a man like no other. He fought terrible monsters and cruel kings, he journeyed through dark forests and fast rivers, his name was lost in the darkness of time, but in the legends he will always be known as the Wild King! His small band of heroes still has a place for one more warrior and that warrior is you — the indomnitable social slot machine spinner — ready to join the quest for the lost Elder Talismans and the treasures of old!

The Wild King free slot machines have 5 reels and 27 paylines and colorful slot machine symbols that bring the legend to life. The Wild King himself, along with his comrades and friends, brandishing their weapons and accoutrements, will all be there on the casino slots reels as you spin for adventure and G-Coins.
The wind-torn Banner is a wild symbol that replaces other symbols to create winning combinations in the free social slots game. The Sword — known as the Blade of Light — is a scatter symbol that bestows Free Spins. And the Elder Talismans are Collect Symbols that turn our already fabulous heroes into Wild symbols when you collect them during the Free Spins round. Play free slots for fun and share in the adventures of the Wild King at Gambino Social Slots Casino!

The Wild King. The man who forges his own destiny in this savage lands. His father’s axe ended the life of many monsters and his crown, forged by seven sorcerers, shows him the path through the most perilous of adventures. The Wild King’s band of friends is small, but they are tightly knit. The Wild King is as good to them, as he is merciless to his enemies!

Akros. The Shaman has been the Wild King’s best friend ever since the time he saved the King from the black snake poison in the Jungles of Shadows. His shamanistic skills are unmatched! When the battle is too tough he will call wild animals, birds and even the spirits to his aid. It is Akros who can sense the mystical powers of the Elder Talismans!

Valoria. The Princess of the Snow Peaks, her love for the Wild King made her abandon her throne and journey with him. She is as beautiful as she is dangerous. For her any battle is a dance — both artful and deadly. Valoria hopes that when they have found the Elder Talismans, she will be able to persuade the Wild King to return to her kingdom so they may rule together as King and Queen of the Snow Peaks.

Zuna. The Wild King defeated this Amazonian Huntress in a duel and spared her life, now she has joined his band and looks for a way to save his life so she may repay the debt. She is unswerving in her loyalty, fierce in any battle, and deadly with her favorite weapon: a poisoned spear.!

Surotai. This experienced Warrior started out as a mercenary, fighting for those who paid him more, but after fighting alongside the Wild King in the Battle of Dragon’s Bridge, he decided to join his quest and to learn the art of combat from the best warrior in the realm. It is said his arrows never miss the hearts of his enemies.

Golden Horn. Legends say that a true king can use the Golden Horn to raise an immortal army which will serve him for all eternity

Battle-axe. The battle-axe can cut through any armor and break any sword. Only barbarians know how to forge such a weapon as this.

Golden Chalice. The symbol of the one true king, this legendary chalice is said to contain “the wine of gods.”

Drakkar. The ship of barbarians allows Wild King to travel the open seas and seek glory beyond the deep water.

Shield. This invincible shield is made from an Old Oak of Sacred Grove. Even dragon’s fire is powerless against it!

Blade of Light. It is said that the true king’s touch will make this legendary sword whole again and show him the path to the Elder Talismans.

Banner. It might be wind-torn and battle-scarred, but this symbol of the Wild King’s lost empire will never fall.

Elder Talismans. Crafted long ago, these mystical trinkets hold the keys to peace, enlightenment and — indeed — the very fate of the world.